The Pakistani rupee (abbreviated as PKR) is the official currency of Pakistan since 1948. The currency (coins & notes) are controlled and issued by Pakistan’s central bank, the State Bank of Pakistan.

Rupee is the English word for rūpiya – which is itself derived from a Sanskrit word. Its meaning is “wrought silver or a coin of silver.”

Rūpaya was originally used to denote the coins that were introduced by ruler Sher Shah Suri.

Pakistani rupee was circulated for the first time in 1947. For one year, Pakistan used British Indian notes and coins by over-stamping them with the word “Pakistan”.

In 1948, new banknotes and coins were issued. One rupee was divided into 16 annas.

The Pakistani currency was decimalized on 1st January 1961 – and the Pakistani rupee was subdivided into 100 Paisas.

As of now, Pakistani Currency has the following banknotes in circulation. All have the image of Quaid e Azam at the front and the following images at the back.

As of now, Pakistan has the following coins in circulation. All have a crescent and star at the front except Rupee 1 coin, and the following images at the back. 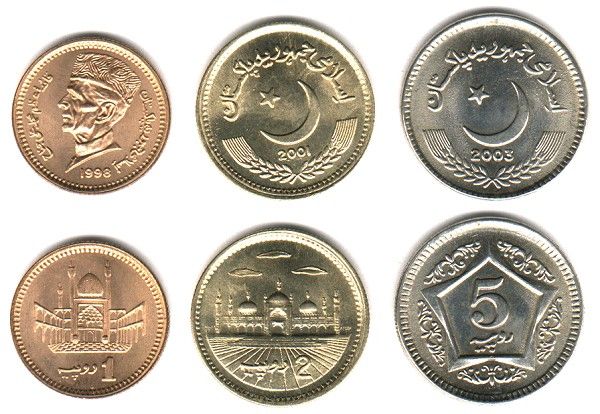 In 2019, the government also launched a commemorative 50 rupees coin to celebrate the 550th birthday of Guru Nanak and to mark the opening of Gurdwara of Kartarpur Pakistan.